The searing pain from the gashes on her back was almost unbearable,  while unseen hands continued to lovingly apply ointment and bandages on her wounds.  She lay motionless, face-down, on a hospital bed in Pioneer Hall, wondering who might be tending to her so carefully; and looked up to see that it was Father David Clemons from Grace Episcopal Church.

That was a dream my wife had, after she had been the organist at Grace Church in Wheatland, California for some time.  Pioneer Hall, which is owned by the church, was where services were taking place while the main church building was being renovated.

In 1992 a trend toward decentralization took place within the Unification Movement. The founder, Reverend Moon, encouraged members to return to their hometown areas and, in connection with that mobilization, also urged them to adopt and serve established Christian churches in their neighborhoods.

When we first came to town we had attended a certain local church where my wife had also helped out with the music. However it had come to our attention through the neighborhood “grapevine” that that particular pastor and his wife had been warning local residents to beware of associating with us. Because of that and other hurtful incidents, which I would love to explain in detail but won’t just yet, my wife was ready to give up on dealing with Christians; she even spoke about wanting to leave Wheatland altogether.

However, her experience while playing piano for the chapel at Beale Air Force Base, her loving acceptance by the mostly African-American congregation at Mt.Olivet Baptist Church in Olivehurst, and her relationship with Father Clemons and Grace Episcopal Church all combined to help heal her heart.

Since my wife was raised Catholic, she was quite comfortable attending services at Grace. “Catholic Lite” they term it, and she agrees. However, with the exception of attending the occasional service at Faith Lutheran in Marysville, when my grandparents were visiting from Minnesota, and praying or taking a short nap inside many of the unlocked Lutheran churches throughout the Midwest, when I was on MFT*, I had seldom been inside a “mainline” church. But it wasn’t long before my children and I felt at home at Grace.

The church is a quaint building with well-kept grounds on Third St. in Wheatland. It has been a meeting place and refuge for local families since 1874. The sanctuary with its stained-glass windows, high ceiling and beautiful altar can quickly fill a person with a sense of holiness, especially if they enter the church during “quiet time”, which is a fairly new tradition of dedicating a period of prayer and meditation before the official service begins.  http://gracewheatland.org/

There is no band playing contemporary Christian music, but many in the congregation are accomplished singers and the small church often resonates with heavenly music. When I am standing there singing, following along in a hymn book, I often notice that many of the songs were written in the seventeen or eighteen hundreds, and I think of the congregations of the past that would have gathered to sing those same songs, not only in Wheatland, but throughout America.

Grace Church doesn’t have a full-time priest and nearly every week there is someone different leading the service, which has brought an interesting variety of personalities throughout the years: Father Art, who grew up in Manhattan and was blind for many years until the modern miracle of cornea transplants, with his stories about the trials of working as a hospital chaplain in Sacramento; Dr. Dave, the shrink, with his deeply thoughtful and intellectual sermons combining the practical wisdom of a Jungian analyst with his understanding of spirituality; or Father John who inspired me to visit and write about places of worship when he told the congregation, “It’s not good to be comfortable in church”; and many others.

Jesus told his disciples, “You can tell by their fruits….” when warning them about false prophets. Good advice, not only for discerning false prophets, but for deciding the type of people to hang out with. The fruits of the congregation at Grace are many, for example, their extensive volunteer hours in the local community. They are involved in just about every good thing from Girl Scouts, tree-planting, Lions Club, Spiritual Needlework, Fire Department, Parents Day, and the Martin Luther King Music Festival, to opening up the fellowship hall weekly for AA meetings. In addition they hold a public pancake supper on “Shrove Tuesday” each year and co-host an annual Memorial Day luncheon.

These accomplishments are even more remarkable considering the small size of the Church’s congregation. On a typical Sunday there are fewer than twenty people in attendance. You could call it the little church with a big heart. Some locals affectionately call the tiny building “Grace Cathedral”. In any case, the members of the church certainly have a heart of service to the wider community.

For Lent, Grace church held a study group based on the book, “Christianity for the Rest of Us: How the Neighborhood Church is Transforming the Faith”,  in which the author, religion expert Diane Bass, counters the accepted wisdom that the mainline church is dying, with her discovery that quite the opposite is true. Many of these churches through their consistent practice of contemplation, service, diversity, and worship are indeed growing, and are helping to fulfill the practical and spiritual needs of the community. 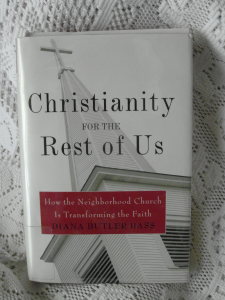 On your first few visits to Grace Episcopal Church in Wheatland, it might be hard to figure out what book you’re supposed to be reading from, or when you’re supposed to stand, sit or kneel. You might wonder why ancient rituals are still being practiced at all. Or like me, you might literally or mentally be crossing your fingers when the Nicene Creed is read; but don’t worry. No one will judge you. Be patient, prayerful, and trusting, and there’s a pretty good chance that you, too, could be “healed by Grace”.

4 thoughts on “Healed by Grace”