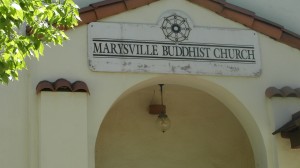 I looked in the Appeal-Democrat newspaper to see if I could find anything of interest happening in the local religious community. I saw that the Buddhist Church of Marysville was inviting the public to their service and that the Reverends Tim and Carol Castle from Sacramento would be officiating. So that’s where I decided to go.

As I parked my car on B St. near the church, I thought back to a time when I heard a lecture given by Christian psychiatrist, Dr. M. Scott Peck, author of the immensely popular book, The Road Less Traveled, and many others. To the shock of the mostly Christian audience, Dr. Peck exclaimed, “The most Christian man I ever met was a Buddhist, because of his Christ-like qualities.”

When I entered the Buddhist Church I felt that, with the exception of the fairly elaborate altar at the front of the church, it was as if I had walked into a traditional American church. There were pews with song and prayer books in the racks and a lady was playing an organ in the front left-hand corner of the sanctuary. I didn’t recognize the tune, but again, it still felt like I was in a “main-line” Christian church. I introduced myself to Reverend Tim and told him my purpose for being there. I also inquired if it was okay to take pictures. He said taking photos would be fine as long as they weren’t taken during the actual service.

Service began with the sudden clanging of a gong. Just like the Episcopal Church, I thought, except the Buddhists use a gong instead of a bell.

Since it was Mothers’ Day, Reverend Tim gave a brief message about the importance of mothers, which included the Buddhist belief that no matter how hard we try, we can never repay our parents for their unselfishness in raising us.

Reverend Tim mentioned a fairly new tradition in their Sacramento church which involves setting aside a special day to honor parents.  They call it Parents’ Day. I found that very interesting because my wife and I have been promoting National Parents’ Day, a relatively new American holiday which falls on the fourth Sunday of July, since 2006.

There were several young people from Yuba College attending the service because of a project for their World Religion class.  A special  session took place after the service during which visitors could ask questions about the church and the Buddhist faith. The students had many good and deep questions; one pointed out that the whole experience wasn’t as different as he thought it would be.

Reverend Tim, who’s Caucasian, quipped, “Yeah, you were probably expecting an Asian with a shaved head wearing an orange robe?”

When one student asked about the meaning of the various items on the altar, Mrs. Castle explained that many of them represented perfection, such as gold or an abundance of food; or the beauty of nature such as flowers. And since many of the people in the original temple were peasants, they could get comfort through looking at these symbols. Mrs. Castle went on to say that today, especially in the western world, since most people have plenty of food and material comforts, many of the altars at a modern Buddhist church might simply have plants or a water fountain as symbols of serenity.

Another student asked about the use of incense during the service and was told that it was to purify the atmosphere–not just spiritually, but since the people coming to the temple had been working in the fields and sweating, incense served the very practical purpose of making the temple smell better.

Personally, I find it a bit sad that although I have been in the Yuba/Sutter area for over forty years, that was the first time I had ever been in the Marysville Buddhist Church, or had taken the time to look at their beautiful sanctuary and garden. My short visit was truly enlightening.

Some time ago, my wife and I read through two volumes of World Scripture, a publication that helps illuminate the inherent goodness within most religions. Admittedly, when we read some of the Buddhist texts, we found them hard to understand; not too unlike when, many years ago, I read Zen and the Art of Motorcycle Maintenance. Since I was mostly into motorcycles back then, I kind of skimmed over the Zen parts. 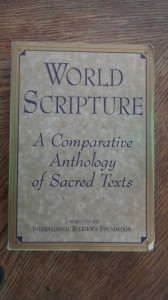 However, my visit with the Marysville Buddhists helped me appreciate the contribution that Buddhism has made toward inspiring humanity to care for one another and strive to be less selfish, traits which are hard to argue against.

Note to visitors: It was especially gratifying to see college students at the service. I hope these young people are also encouraged to attend some of the more typical American religious services (such as Jewish, Catholic, Protestant or Mormon) to round out their understanding of religion and culture. However, one thing I would recommend is that they dress appropriately; halter tops and tight shorts may make the student and the congregation uncomfortable.

2 thoughts on “From Baptists to Buddhists”