Linda, California. If you search for it on the Internet you don’t find much. Mostly you find references and pictures to such places as: Yorba Linda, Loma Linda, Terra Linda and Rio Linda. That is, unless you type a minus sign in front of those names to eliminate them in a Google search. When I searched, not much came up except for pictures of the remodeled Burger King, the once prosperous and now nearly-vacant Peach Tree Mall, and a listing for a home for sale on the ominously named Twisted River Drive in the Edgewater subdivision, which must have been named by someone who did not know about the history of devastating floods in the area.

Linda means beautiful in Spanish. It’s also the name of a pioneer steamer that traveled up the Yuba River and a company that tried to set up a town in 1879. That town, consisting of a house, a store and two or three small dwellings was short-lived and after a couple of years the vision of a town called Linda was abandoned. Today, even though the area has nearly 20,000 residents, Linda still isn’t a town. It’s considered a Census Designated Place (CDP) by the U.S. Census Bureau. Some of the CDPs in the United States such as Bethesda, Maryland and Montecito, California are very exclusive. Linda is not one of them.

I grew up in that Census Designated Place about 45 miles north of Sacramento. After my Dad first moved here from Minnesota, he was told by many people in Marysville and Yuba City, when he was planning to buy some property in Linda, “You don’t want to live there! That’s where all the ‘Okies’ and ‘Arkies’ live.” (Economic refugees from Oklahoma and Arkansas moved to Linda to escape the dust bowl hoping to find work in the numerous fruit orchards that surrounded the area.)

Well, my Dad didn’t listen to those Linda naysayers, and with the help of my mother’s parents, bought a house on a three-acre parcel, at the end of a dirt road off of Griffith Ave.

Now my grandparents, who were from Northern Minnesota, had grand plans of escaping their frigid winters by towing a travel-trailer and parking it on my dad’s property in the CDP of Linda during the coldest months. That plan barely lasted one season.

Trouble was, my grandparents, as did many others, thought that California was a place of abundant sunshine, movie stars, ocean views and who knows what else. For instance when I first met one of my cousins on a trip to Minnesota, one of the first questions he asked me was, “How do you like surfing?”

“Huh? Man, the ocean’s at least two hours away from where I live. Besides, we never owned a car that could make it that far. Now, unless you count me holding onto a rope tied to a tree while standing on a board floating in the Yuba River, no, I have never gone surfing!” I responded.

Admittedly, compared to Northern Minnesota, winters in Linda are rather mild. But it can and does rain a lot. Dense fog often sets in for weeks at a time, and the sun can seem to be only a memory. Whatever the reasons, unexpected bad weather, and perhaps some family problems, my grandparents switched to pulling their travel-trailer to Mesa, Arizona for future winters.

The northern end of Griffith Avenue ends at Hammonton-Smartsville Road. That’s where I would turn to go home after visiting friends or working at my job in Marysville. Often, when I turned right onto Griffith I would sometimes tell myself, One of these days, I’m not going to turn. I’m going to drive straight ahead up to highway 20 and go east and keep driving. Well, one day I didn’t turn at Griffith. I headed east in my old Chevy panel truck to South Lake Tahoe and that’s when I left Linda. 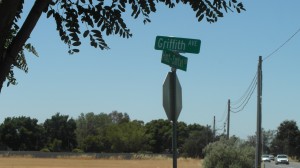 Perhaps, like one of those salmon coming home to the Yuba River after an adventure in the ocean, I too have returned and I’ve got some tales to tell. I hope you find them hopeful, humorous, enlightening, or simply entertaining. It’s my belief that every one of us has an interesting story.  Here’s mine.