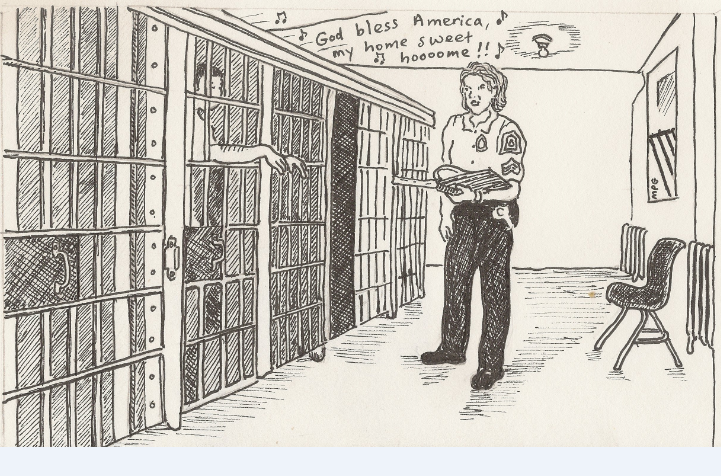 “God bless America,
land that I love.
Stand beside her, and guide her
through the night with the light from above!”

The irony was as thick as the packed Minnesota snow outside our building. Those words filled the stark room and echoed off the concrete walls of the jail house as Danny and I sang out and some Native Americans from the Drunk Tank joined in.

A metal door unlatched across the hall from my cell and eerily squeaked open as a middle-aged woman, dressed in a jailer’s uniform, stepped inside and walked over to me.

“You boys responsible for this?” she asked as I stopped singing and sheepishly nodded my head.

She looked down the hallway and then back at me. I could hear the sadness in her voice as she gently shook her head and said, “What’s wrong with our country? You boys don’t belong here.”

Danny repeated another stanza as the jailer stood and listened.

“God bless America,
land that I love.
Stand beside her, and guide her
through the night with the light from above!

From the mountains, to the prairies,
to the oceans, white with foam,
God bless America, my home sweet home.”

The jailer started to leave as the patriotic song appeared to end, but Danny sang the last line again and I joined in.

“God bless America, my home sweet home.” A loud clang rang out, almost like a cymbal, as the jailer shut the metal door and the song ended.

Maybe Danny just liked the acoustics of a jail cell, because he was always singing every time we got arrested. The first time he did it we were occupying the same cell and he stood up on the stainless steel commode and started belting out Frank Sinatra songs. I wanted to tell him to stop because I needed to take a nap. However, it looked like our fellow inmates were enjoying his singing and I did not want to get on their bad side.

Danny and I had been spending a lot of time enjoying the amenities of America’s “cross bar hotels” because we were out raising funds for our church and some people were not happy with that.

I really wish I would have paid more attention to where I was at the time, how I was treated and the range of accommodations while being housed and fed courtesy of America’s taxpayers. That way, I might have been able to publish some type of guide about our country’s police departments and the quality of their lodgings. You know, like a Michelin guide of America’s jail houses with ratings for how tight the handcuffs were, what the ride in the police car was like, quality of food, friendliness of the staff and customers and the ambience of the jail cell.

Admittedly, it appears that most jails might have been designed by the same person. For the most part, you’ve seen one, you’ve seen them all. However, one thing that often separates a mediocre forced vacation from a great one is the quality of the staff. That said, my vote for my best jail-house experience goes to Ogden, Utah.

Now please, please, do not travel to Ogden and get arrested just because of my recommendation. That was a long time ago, and things might have changed. I should also add that my arrest had nothing to do with my religious affiliation. In fact I had been warned by the police that if I continued to try and peddle my wares, especially on a Sunday in Utah, I would be arrested. I explained the situation to my team leader, but it was like talking to a brain-washed cultist, if you know what I mean, and he told me that as long as I kept the right attitude, the “spirit world” would protect me and everything would be just fine.

Well, I guess my attitude was pretty lousy, because after knocking on just a few doors, Ogden’s boys-in-blue were taking me for a ride.

“Why didn’t you stop selling when we told you to stop?” One of the officers questioned.

Although they were probably Mormons, I doubted they would sympathize with my “spirit world should’ve protected me” angle and I simply told them my team leader made me do it.

It was pretty obvious that one of the reasons Ogden was a good place for a forced vacation was because they didn’t have many customers to deal with and they could spend more time with their guests. When I was jailed, there were only two of us incarcerated: me, and a wayward teenager that got busted for stealing a car. The place was super clean, we got fed McDonald’s for dinner and breakfast, and the staff was quite friendly.

I do believe that God has blessed America and I am grateful that it is “my home sweet home”, because although I was arrested more times than I can remember, I was always released the next day. For the most part, unless you’re a foreign national leading a new religious movement, it is still, as sung in another patriotic tune, “the land of the free, and home of the brave.”

Land of the Free