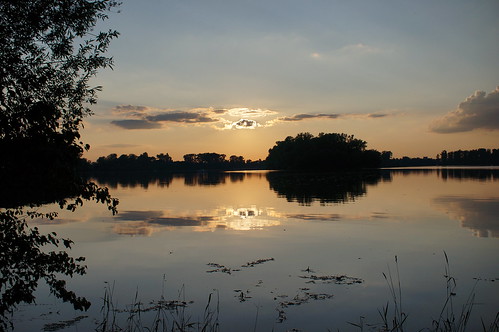 “Do Not Go Gentle into that Good Night.”

I’m not sure how I came across that poem by Dylan Thomas to his dying father, but there it was, on my computer screen.

I never expected my dad to live to be ninety years old. As a young man he got the tropical disease filariasis while trying to rid the Philippine Islands of the invading Japanese, along with his fellow Marines. Most of his life he smoked, drank and was fond of junk food. He loved Hostess Sno Balls, Danish pastries, sugary cinnamon rolls, fudge and all kinds of candy. In his late 60s he weighed nearly three hundred pounds; but that was before he was diagnosed with colon cancer and also congestive heart failure. He weighs about one-third of that now, but clearly, this cat has more than nine lives.

For over twenty years Dad lived in a single-wide mobile home that was next to his fruit stand in Wheatland, California. I lived nearby and would often check on him. Many times, I would anxiously wait for my dad’s response after I had knocked on his custom-made, not-so-great-at-sliding, Oriented Strand Board (chip-board) door, which replaced the really-not-so-great-at-sliding glass door that crashed into the living-room one day after years of abuse. That OSB door did not look too out of place however, because it matched the OSB “window” at the front of the trailer.

If Dad wouldn’t answer the door I would then grab a small tree branch and walk over to his bedroom window, which was, believe it or not, a real glass window, and start tapping on it. Luckily, he would then wake up and I knew he was still alive.

My wife and I purchased a house in Wheatland which had a small “granny-flat” in the back which we hoped my dad would move into. However, although his trailer was definitely falling apart, he fought the idea for years, but finally moved into the granny-flat on the day a couple of scum-of-the-earth so-called men, staged a trailer-invasion-robbery against my then eighty-year-old father. They pushed him down, held a gun to his head and shouted, “Where’s all the money?!” somehow thinking that peddling tomatoes and cucumbers would yield more than around a hundred dollars for a day’s work.

Sadly, years later, my dad is still super paranoid after that assault, and is often worried that someone will attack him again.

“That robbery took the wind out of my sails. I lost hope in humanity when that happened,” he often says.

Recently I began to feel that the wind of life in my father’s sails has definitely started to fade, especially when he calls us in the middle of the night and talks about people in his bedroom that aren’t there. Or when he tells us that his old friend Dan Pingle stopped by and sold him some tomato plants and that Victor from the trailer park had just visited and that Victor didn’t want to buy any patriotic beans from the cart-pulling bean seller that somehow made it into my dad’s room.

Worried, I often look in on him while he’s lying on his adjustable bed, see his blanket moving with signs of life, and feel relieved that he’s still with us.

A few days ago on April 19, our family celebrated True Parents’ Day, one of the Unification Church’s major holy days. My wife found a suitable quote about parents from the Quran (in World Scripture, a Comparative Anthology of Sacred Texts) and wrote it on the chalkboard in our dining room:

The Lord has decreed . . . that you be kind to your parents. Whether one or both of them attain old age in your lifetime, do not say to them a word of contempt, nor repel them, but address them in terms of honor. And, out of kindness, lower to them the wing of humility, and say, “My Lord! Bestow upon them Thy mercy even as they cherished me in childhood.” Qur’an 17:23. 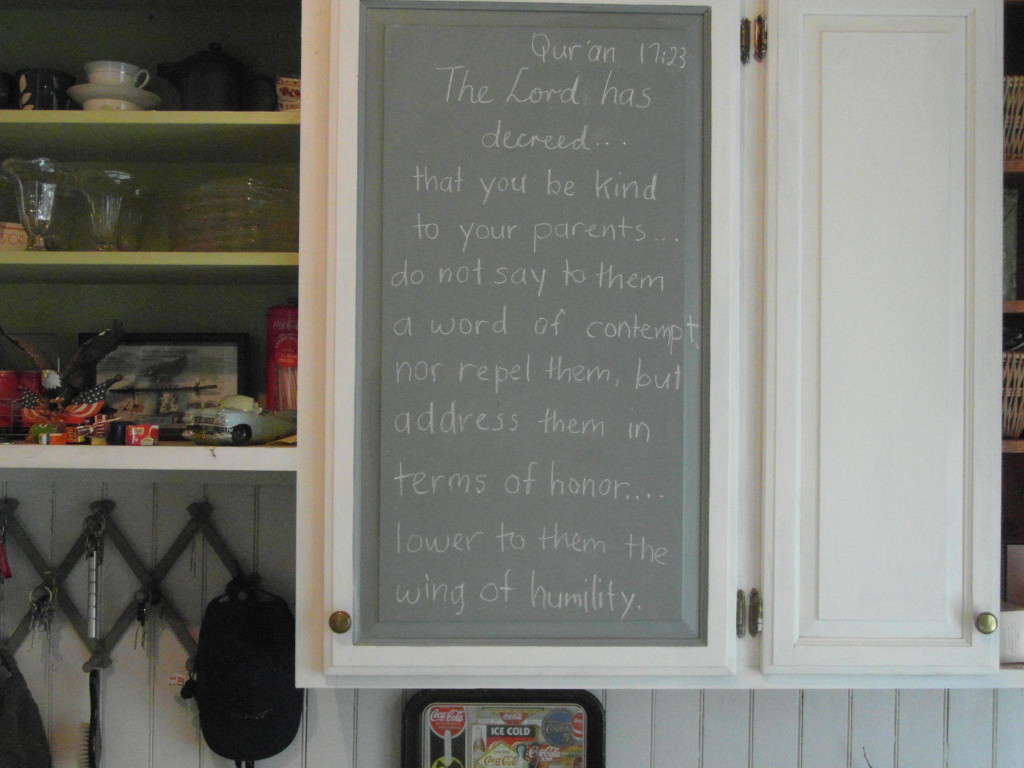 “I hope our boys read that,” I commented.

“It’s good advice for us too,” my wife clarified.

She’s right, you know. I told myself as I thought about how difficult it had been dealing with my dad that week. Somehow, I’ve got to be more patient with him.

“Call 911,” my brother-in-law, who works as a court-appointed conservator of the elderly, told my sister when she asked him about our dad.

He had taken a turn for the worse and was falling out of his bed, but wouldn’t let my sister and me help him. He’d been having hallucinations, or perhaps he was seeing spirits waiting to take him home with them. My sister phoned 911 and soon around half the population of Wheatland (or so it seemed) showed up to help my dad into the awaiting ambulance. 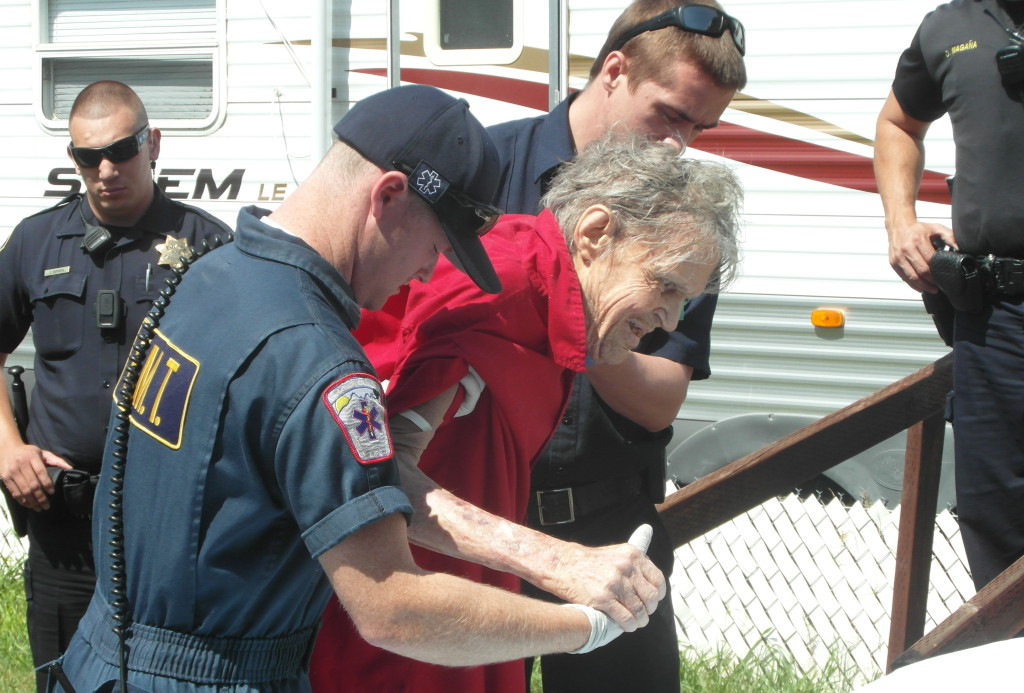 My dad’s in the hospital now. He’s getting better and may even be coming back home or be taken to a nursing home for some skilled care. My sister was asked by the hospital to set up an Advance Directive to help decide what they should do if our father is incapacitated and can’t make his own decisions regarding end-of-life issues.

“How much effort should the doctors make to keep you alive, even if you’ll remain unconscious?” My sister asked Dad.

“I want them to do everything they can to keep me alive,” he responded.

It looks like he’ll be “raging against the dying of the light” after all. Who am I to suggest otherwise?

2 thoughts on “Dying of the Light”