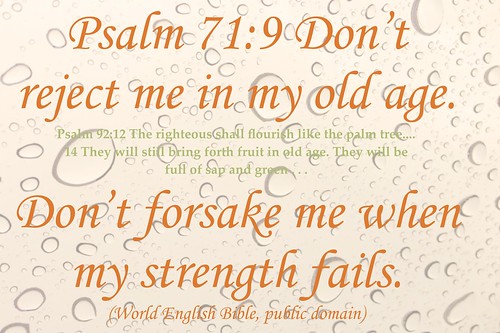 “Will you pray for me?” the elderly woman asked somberly as she grasped my hand and her eyes began to water.

“Of course, what would you like me to pray?” I responded.

“I’m afraid my family wants to stick me into an old folks’ home. They think I can’t take care of myself. I’d rather die than move into one of those horrid places.”

I held her hands and we prayed as we stood together outside on the sidewalk near her apartment amongst the small retirement community.

I was often amazed at how someone would open their hearts to me, a complete stranger out hawking candy, flowers, or trinkets for my church. Usually it was an elderly person who would look beyond the unfavorable media portrayal of me as a brainwashed member of the Unification Church, and see me as a sincere young man that loved God and wanted to help people.

When Reverend Moon first came to America he was saddened to see so many elderly people set aside and forgotten in nursing homes. He shared many stories of how wonderful it was to have his grandparents close by while he was growing up in a small village in North Korea. He has also expressed that ideally households should be made up of three generations.

Although my mother died before my children were born, my dad is still around and in the last twenty years he has never stayed more than a block away from our family. For the last few years he has been living with us. It has often been quite difficult taking care of my dad, but I do believe my family has benefited from his presence. It’s especially rewarding to hear my kids defending their grandfather if I complain about him.

Some of my favorite places to visit when I was fundraising for my church were the apartments above shops in the downtown areas of towns and cities.

“You’re the only person that’s knocked on my door in over a year,” the startled elderly woman told me as I stood outside her apartment above a business in a small city in Iowa.

She invited me inside and asked if I would like some lemonade, and when I said yes, she also brought me some cookies. She then shared with me how much she missed her family members who had left Iowa. I didn’t say much but just listened as she talked about her life. I wasn’t in that tidy, memento-filled apartment very long and can’t even remember the stories she shared, but I still remember her kindness. I’m quite sure that I also brought some joy to the little old lady at the top of that lonely staircase.

Sometimes I could spend weeks never hearing a kind word or any shred of encouragement from anyone, so when it did happen it was immensely memorable.

It was late in the evening when I walked up to the gentleman filling up his car at the gas station. I asked him if he could give a couple of church missionaries, me and my friend Tom, a ride to the next small mid-western town. He said he’d love to and soon we were heading down the highway with this kind man and his wife.

We hadn’t gotten very far when we became aware of the siren and flashing red lights of a police cruiser which overtook us and pulled us over.

“Don’t worry,” the officer told our driver, “we’re just after those boys in back.”

“What did they do? Aren’t they missionaries?”

“Yeah, but they’re with a cult, and we don’t want them in our town,” replied the officer.

“But they’re leaving your town!” the Good Samaritan countered as Tom and I were asked by the officer’s deputy to get out of the car.

The police officer, whose uniform consisted of jeans and the word “Police” spelled in glitter across the front of his T-shirt, patted us hardened criminals down and then arrested us. Much to my surprise our driver hung around even though he was told he could leave. Obviously he wasn’t scared of us because he walked up to us and said, “I can still give you guys a ride if you need it.”

“Thank you so much for that offer,” I replied. “I don’t think we’ll need it because it looks like we’ll be spending the night in the local cross-bar-hotel (jail). You’re a good man. God bless you.”

There are so many stories I’d like to share about the elderly people that have touched my life and inspired me but it would take too long. However, I would like to end with a story which still causes me to chuckle. It’s about  a decrepit old man sitting in a wheelchair in a convalescent home…

I was traveling on my own throughout the country selling pictures and living out of a van. I would often make my best sales at convalescent homes because the pictures were safe and durable.  Often employees at the facilities would also buy. At one of those homes I had set up pictures in the lobby and many people were admiring them, especially the picture  of a Siberian tiger. As my potential customers started to comment and ooh and ah about the tiger, an old man who could barely sit up on his own, and looked as if he didn’t have much longer to live, cried out in his crackly voice, “Why’s everybody talking about me?”

British historian Arnold Toynbee made the following observation after studying the world’s civilizations:

“…a society’s quality and durability can best be measured by the respect and care given its elderly citizens”.

We have much to learn from our elders. Hopefully their wisdom and understanding will not go to waste.

by  Tambako the Jaguar

6 thoughts on “Wisdom of the Aged”