What’s that sound? I thought as I walked home one summer day after Little League practice.

It was faint, but as I stopped and listened I could hear a whimper coming from the cornfield next to the dirt road that led to our house. 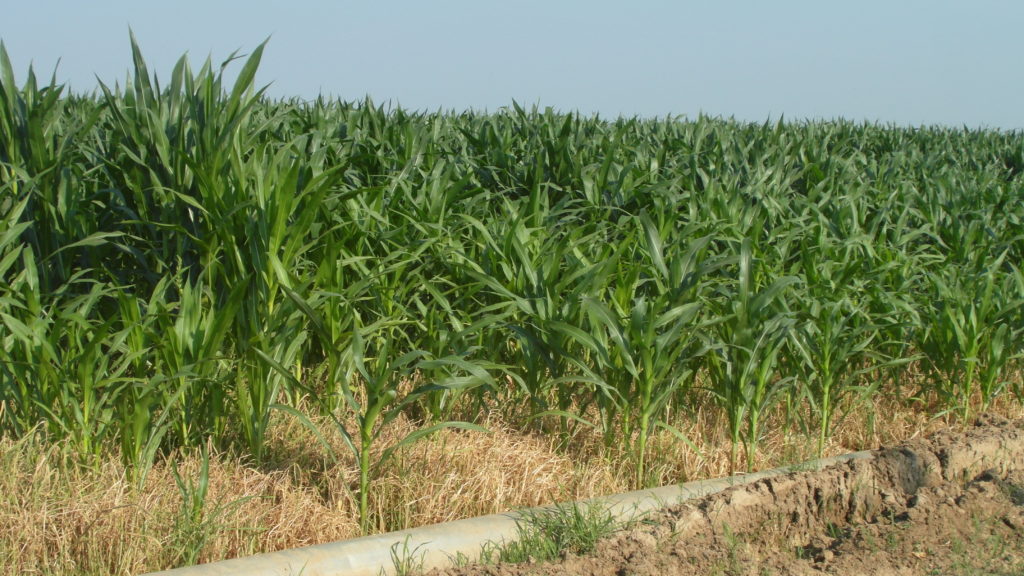 Hopping the barbed wire fence, I made my way through the field toward the whimpering. As I approached the sound, several cornstalks began to rustle briskly. I stopped, reached out with both arms, cautiously parting the giant stalks, and discovered a young black Labrador dog. Its leash was tangled up in the field corn and it was sure glad to see me. As I tried to free it, the dog kept jumping around, wagging its tail and licking my face.  Finally, I was able to open the clasp on the leash and the puppy darted away down a narrow path between the high corn-rows, stopping briefly to look back at me and wag its tail a few more times. I took it as a “thank you”.

That dirt road has a signpost now: Tiptoe Lane. Although it had no name when I was growing up, some of the locals called it Gauper Lane because our family lived at the end. A former volunteer with the Linda Fire Department remembers that their map once listed it as Gauper Lane. Too bad the name didn’t stick; having a road named after our family would have been an honor, even if it was only dirt. 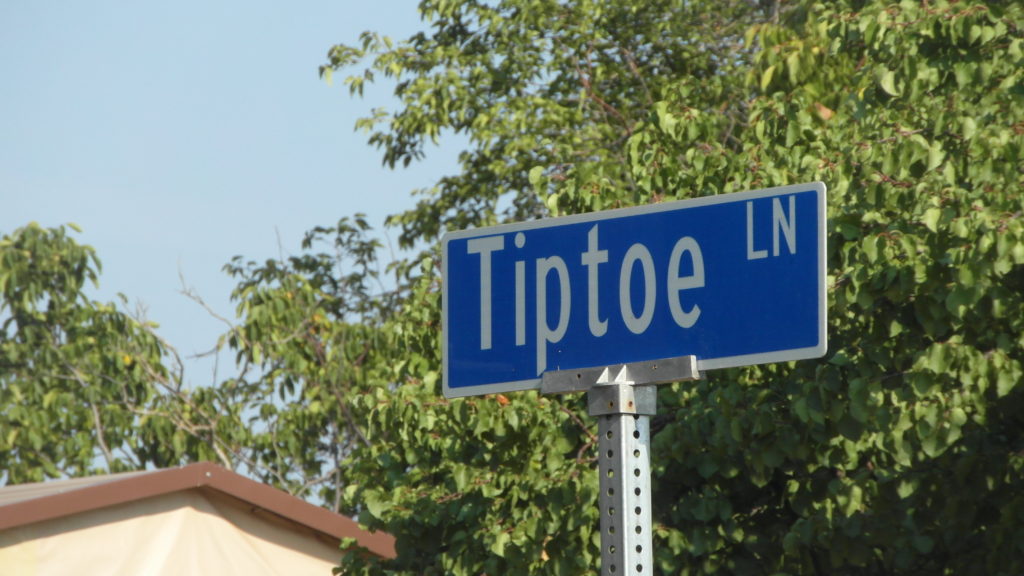 Tiptoe Lane is perpendicular to Griffith Ave., parallel to Hammonton and Beale Roads in Linda. It’s about a quarter of a mile long and, as dirt roads go, has never been in the best of shape.  During my childhood it was scarred with pot holes which filled with water during the rainy season.

About two-thirds of the way up, where the road made a ninety degree turn to the left, an especially large hole obstructed the entire bend.

When that hole was full of water it was nearly impossible, even for the most intrepid dirt road navigator, to continue down the lane on dry land.

For pedestrians there was some relatively dry ground next to the fence where a person could hold onto the fence, and carefully side-step to the corner post. Once you made it to the post, you could grab it with one hand then swing your body around the corner.

One frosty morning I was in a hurry to catch the school bus, so I quickly scuttled along the fence line, carefully grabbed the post (making sure my manhood didn’t smash against it), and swung my leg around; but when my foot hit the frozen grass, it slipped and I fell backwards. Plop! I landed in the large pot-hole, now a frigid mud puddle, while thin pieces of ice floated around me. I didn’t know if I should laugh or cry, but in any case, I missed the bus. 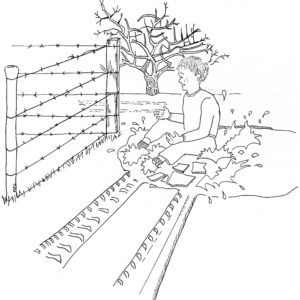 There are good points about living at the end of a dirt road.

We always knew when someone was coming to visit. Our dogs would bark, and if the corn wasn’t too tall, you could look out across the field and decide which course of action to take. If we didn’t recognize the vehicle, it was usually the Jehovah’s Witnesses and we had time to run and hide. Likewise, if it was Mormon missionaries on their bicycles, sometimes I would climb out a back window to avoid them.

You also got a lot of exercise walking to the bus stop or visiting a friend’s house. Even if we got a ride home from someone, since most people didn’t want to get their cars dirty, they’d usually drop us off where the dirt road met the pavement. (Speaking of dirt meeting pavement, my wife says that could be a good metaphor for our marriage, but that’s another story.)

Attempts at keeping our own vehicles clean were futile. I found it especially challenging to maintain the shiny chrome of my chopped Triumph motorcycle. I should have stuck with the Volkswagen Beetle my sister sold me.

The Beetle was a faded red color that complemented its rust spots. The floorboards were especially rusty, and you could see the ground in some places.  Dust and water would creep through the floor and somehow a weed seed found its way into the passenger side, sprouted and started growing. I grew fond of that plant and would admonish passengers to take care around my unique vehicle accessory. Sadly, the car-plant started dying as summer approached and the mud puddles on the road dried up. I briefly contemplated prolonging its life with supplemental watering; but it was getting big and I didn’t want to risk having to explain to a police officer why I had something growing in my car. So I let my plant friend dry up and die a natural death, which didn’t take very long, since the summer sun made the inside of that Volkswagen like an oven. 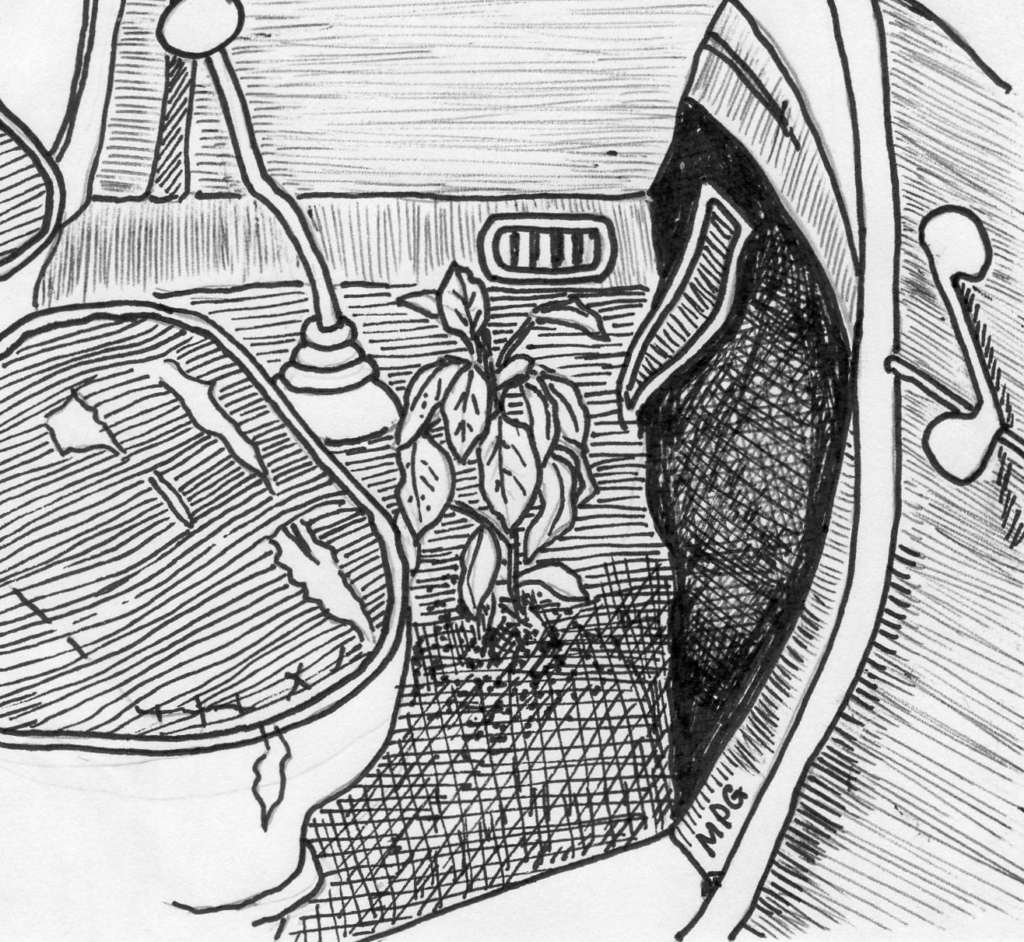 I decided to remove the caked dirt from the floorboards after that foray into mobile horticulture; in doing so, I noticed I could no longer see the ground. My Volkswagen Bug now had custom- made adobe flooring and I decided to keep it that way.  Bet you won’t find that in J.C. Whitney’s automotive accessory catalog.

There are so many more memories connected to that dirt road: the talking crow, Oinky our pet pig, and even a time when I feared for my life; but I won’t share them now. After all, I have to save some stories for my book.

15 thoughts on “The Dirt Road”