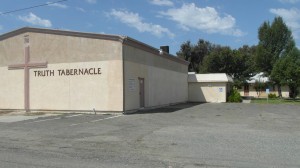 Truth Tabernacle at 5206 Tulip Rd. in Olivehurst, just off Lindhurst Ave, is a humble, unassuming building that I often pass while driving down that way. But whatever the building and grounds may lack in aesthetics is quickly forgotten when you enter the church, hear the music and the message, and feel the spirit.

Minutes before walking into the church, I had been driving along Olivehurst Ave. towards Lindhurst when I saw a young couple with a baby carriage and several young children in tow, walking across the bridge that goes over the freeway. Although the young man looked a bit rough, with his shaved head and tattoos, I thought perhaps they were heading to Truth Tabernacle.

I arrived at the church a little before 10:00 A.M. which was right before the adult Bible study. Live music was playing and a middle-aged man with a British accent led the congregation in some songs. The music was good and I joined in the singing and waited for the person that would be leading the study. Just as I started to sit down, the couple that was walking on the bridge with their children entered the church.

The Bible teacher for the morning was Assistant Pastor John Floe. He had us open our Bibles to Genesis Chapter 4 and read about the account of Cain and Abel and the giving of their offerings to God. I found it interesting that in a Toastmasters’ Speaking Contest I had competed in  just the day before, the title of my speech was “Am I My Brother’s Keeper?” which comes from Genesis 4.

Pastor Floe encouraged everyone to have a good attitude, to trust in God, and to use the power of the Holy Spirit to help us to resist temptation. He reminded us that God is a god who doesn’t want us to fail and advised us to ask God for his guidance in decisions we make in life. That hit close to home for me as I’ve got some serious decisions about a job, my business and my children I need to make soon, which I almost find overwhelming. I think I’ll take Pastor Floe’s advice about asking God for guidance.

I was impressed by the sincerity of the pastor, and the quality of his message and told him so when he finished up the study. He was raised in South Dakota which is where my mother was born, and where I spent a lot of time fund-raising for my own church. We exchanged some small talk, and the pastor thanked me for coming.

After a short break the Sunday Service began and the relatively small room started to fill with people. The band began to play and the congregation joined in the song. I was impressed. The music was, well, kind of like what Goldilocks might say: “Not too quiet, not too loud, it was just right.” So far, of the many churches I’ve attended, I found the music at Truth Tabernacle to be the best combination of acoustics, congregational singing, the people on stage, the spirit; everything seemed to fit. When I joined in singing, “God my Savior, God my Deliverer”, my eyes teared up.

The sermon was given by a young man who I guessed was probably just beginning his preaching role at the church. I’m not sure why, but I didn’t seem to get much out of the sermon. Perhaps it was his young age, his inexperience, or maybe it was just me. But one point of his sermon touched my heart: it doesn’t matter where we go, God will be there.

The service ended. Some people thanked me for coming to church. I made a point of talking to a young man from Kenya, saying hello to a couple and their children that I know and to several others in the congregation.

It’s been said, “Some of the best things come in small packages.” Truth Tabernacle is one of those packages; pay them a visit someday. I hope you’ll find it rewarding and uplifting.